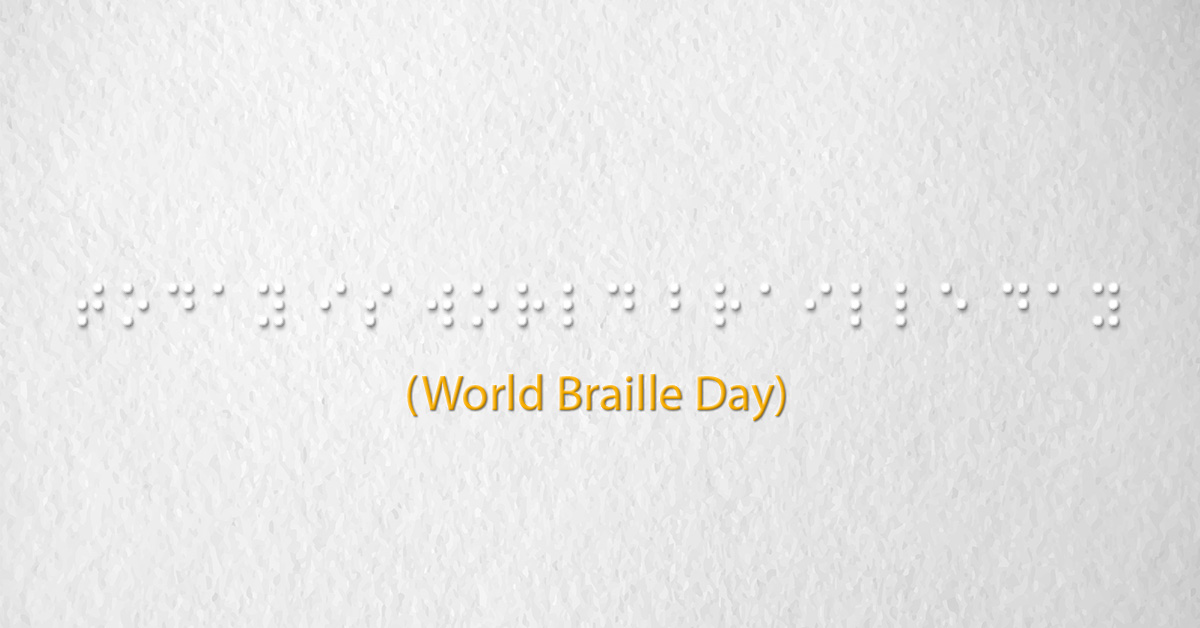 Why do we Celebrate World Braille Day?

World Braille Day commemorates the birth of Louis Braille – on 04 January 1809 in France. In 1829 he published his “Method of Writing Words, Music, and Plain Song by Means of Dots, for Use by the Blind and Arranged by Them.”

But why is there a World Braille Day? What’s the big deal?

Perhaps the stories of HM, Bruce Sexton, and Eric Guillory will answer those questions.

In 2011, HM was an eleven-year-old fifth-grade student enrolled in a public school in New Jersey. Legally blind from birth, HM was diagnosed with albinism and nystagmus. H.M.’s vision was 20/200.

Although the school district categorized HM as a print reader, HM actually had a very limited vision that allowed him to read enlarged print for very short periods of time. In addition, he could not sustain that performance for any length of time. In order to see well enough, HM was forced to bend over so his eyes were inches from the page. Even then, he had to use an enlarged font, and the shadow cast upon the words only increased the difficulty. Moreover, this position quickly caused his back and neck muscles to cramp.

Although HM’s parents continued to tell school officials that their son was experiencing visual fatigue and was having difficulty reading, the school board and its consultant, the New Jersey Commission for the Blind and Visually Impaired (CBVI), insisted that HM was a proficient print reader. They maintained this position despite HM’s placement in a special education resource room class for Language Arts.

Thanks to their involvement in the National Federation of the Blind, HM’s parents were knowledgeable about the instruction of blind students. As a result, they formally requested Braille instruction for HM. When the school district refused, we filed for due process. Thus ensued a three-year battle with the school district, which absolutely refused to provide HM with Braille instruction, insisting he was not blind. That contention was based on HM’s limited vision. Like 90% of blind people, HM did have some vision. However, it was very limited, and he met the criteria to be considered legally blind and to receive Braille instruction.

STARK CONTRAST IN OUTCOMES BETWEEN BRAILLE READERS AND PRINT READERS

In addition to highlighting the presumption of Braille in the IDEA, the case of HM v. Oceanport demonstrated the stark contrast between blind students who are taught to read Braille early and those who are not. To see that stark contrast, consider two of the witnesses who testified in the HM case.

The first witness, Bruce Sexton, is blind. His vision was 20/200. Like most blind people, he has some vision, but he functions like a blind person, utilizing a cane to navigate his environment.

Mr. Sexton was not given Braille instruction in grade school. Like HM, he had back strain from leaning two or three inches above print instruction. Trying to read in this manner slowed him down, he could not track what the other students were reading out loud, and he had to contort his body to see the enlarged text on the CCTV.

Mr. Sexton finally learned Braille after graduating from high school with a 2.8 GPA despite a high average IQ. However, learning Braille that late in life precluded him from mastering it in order to utilize it for learning, and it took him eight and a half years to graduate from college with a four-year degree.

This type of outcome is not unusual for blind people, who are significantly underrepresented among college graduates and the gainfully employed.

The second witness to testify was Eric Guillory. Mr. Guillory was also blind from birth, due to a congenital optic nerve hypoplasia. His acuity was 20/400. He learned Braille starting at age three, when he was first classified and given an IEP. At the time of his testimony, Mr. Guillory held a BA in Social Studies education and an MA in Blindness and Visual Impairment. He was the Director of Youth Services for the Louisiana Center for the Blind. He taught instructional Braille, did outreach and technical assistance, and taught employment skills and resume writing. Mr. Guillory was President of the National Organization of Professionals in Blindness Education. He learned his activities of daily living skills (i.e., cooking) non-visually. He moved through the courtroom without difficulty, and radiated confidence.

After ten days of trial, the court ordered the school district to provide HM with Braille instruction and with compensatory education, including three summer-intensive Braille programs. HM attended these programs, where he learned comprehensive, valuable orientation and mobility skills and the activities of daily living that sighted people take for granted. This helped bring HM more on par with his sighted peers.

HM’s case set an important legal precedent in the education of the blind. The court found that

Do you have a student with a visual impairment? Are they receiving instruction in Braille and in Orientation and Mobility?